A chieftain of the All Progressives Congress (APC) in Lagos State, Joe Igbokwe, on Saturday slammed the soi-disant Unknown Gunmen, saying they are never liberators.

POLITICS NIGERIA reports that Igbokwe was reacting to the recent mindless killing of 30 cattle in Anambra State.

Some unknown gunmen had invaded the Igboukwu Cattle Market and opened fire on animals belonging to sixty-one-year-old Matthew Ifionu.

The attack occurred about three weeks ago at a cattle market in Igboukwu in Aguata Local Government Area (LGA) of Anambra State.

It followed the April ban on cows outside ranches by the proscribed Indigenous People of Biafra (IPOB). 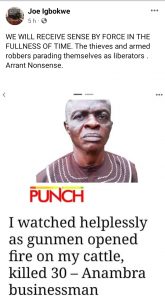 “We will receive sense by force in the fullness of time. The thieves and armed robbers parading themselves as liberators . Arrant Nonsense,” Igbokwe wrote on his known Facebook page.

There has been heightened insecurity in the southeast region in the last 12 months. Security agents and residents, have been killed by so-called unknown gunmen.