Popular Human Rights Activist, Deji Adeyanju was seriously injured after supporters of the Buhari Administration attacked him during a protest against the continued illegal detention of Human rights activist and Sahara Reporters Publisher, Omoyele Sowore.

A reporter for AriseTV who covered the protest said pro-Buhari demonstrators violently disrupted it, chasing Mr Adeyanju and others from the venue.

An amateur video shared on Twitter showed some youth singing praises of President Muhammadu Buhari advancing towards the kick-off venue of the protest outside the National Human Rights Commission.

The protest held on Monday morning after the expiration of a two-week ultimatum which activists issued to Mr Buhari to order immediate compliance to outstanding court orders by federal law enforcement authorities. The Lagos leg of the demonstration also held in Lagos on Monday with light attendance.

Below are Photographs from the scene; 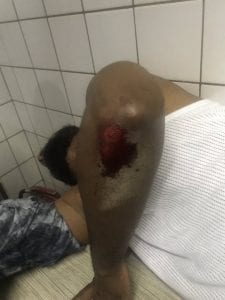 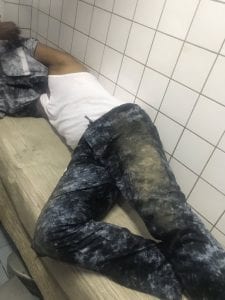