The Delta State Government has warned gunmen enforcing the sit-at-home order originally declared by the outlawed Indigenous People of Biafra (IPOB) in Asaba and its environs, to henceforth desist from the act.

In a statement on Monday evening signed by Patrick Ukah, Secretary to the State Government, obtained by POLITICS NIGERIA, the government warned that any group of persons under any guise, disturbing the peace in the state “will be dealt with accordingly”. 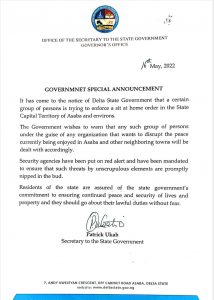 This news medium learned that there was also apprehension on Monday in Asaba and its environs as parents trooped to schools to pick their children as suspected IPOB members reportedly entered the city to enforce the sit-at-home order, which they said is in solidarity with their detained leader, Nnamdi Kanu.

“Security agencies have been put on red alert and have been mandated to ensure that such threats by unscrupulous elements are promptly nipped in the bud.

“Residents of the state are assured of the state government’s commitment to ensuring continued peace and security of lives and property, and they should go about their lawful duties without fear,” the Delta government’s statement reads in part.