Aloy Ejimakor, who is a solicitor to Nnamdi Kanu, has stressed that the outlawed Indigenous People of Biafra (IPOB) members arrested during a meeting in Ghana will be defended until they are free.

Recall the police in Ghana stormed the venue of IPOB’s monthly meeting around Mallam Junction in Accra penultimate Sunday, and arrested an undisclosed number of members of the controversial group.

The reason for the action was not disclosed.

In a video seen by POLITICS NIGERIA, the arrested members were seen singing a pro-Biafra solidarity song.

They were subsequently taken to a police station in Accra where they were profiled.

Now, Ejimakor has revealed what IPOB backers are doing to save the seized separatists. 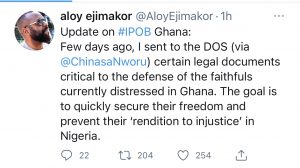 “Update on #IPOB Ghana:
Few days ago, I sent to the DOS (via @ChinasaNworu) certain legal documents critical to the defense of the faithfuls currently distressed in Ghana. The goal is to quickly secure their freedom and prevent their ‘rendition to injustice’ in Nigeria,” Ejimakor wrote on his known Twitter handle on Monday morning.