In a statement on Wednesday by Brigadier-General Onyema Nwachukwu, the Army spokesperson, obtained by POLITICS NIGERIA, authorities said those arrested on Tuesday were enroute to Utanga village, towards Obudu Mountain Resort in Cross River State.

This newspaper learned that the security operatives deployed at Forward Operating Base Amana attempted to stop the vehicle conveying the suspects, but the driver evaded the scrutiny and zoomed off.

The driver’s defiance compelled the troops to open fire on the tyres of the vehicle, thereby immobilising it.

See some photos of exhibits retrieved below: 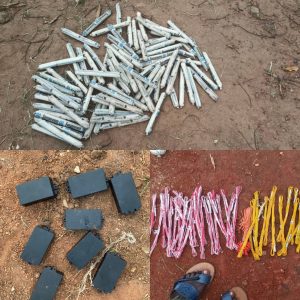