I note with serious concern the worsening Xenophobic attacks on foreign nationals in South Africa in which Nigerians have been major victims.

Nigeria has had enough of its citizens being targets of these attacks and will no longer tolerate hate crimes in any form against its citizens who are doing legitimate businesses in that country.

Xenophobic violence is most condemnable anywhere; more so in South Africa, a country whose citizens benefitted from the unwavered support and solidarity of Africans and freedom lovers across the world in their historic struggle against apartheid.

More disturbing, however, is that these attacks indicate the neglect of educating the younger generations on the sacrifices that Africans proudly made towards expunging the scourges of colonialism and apartheid from their continent.

The enormous contributions of Nigeria to this historic struggle is underscored by its recognition as a frontline state in the prolonged confrontation against the powerful racist regime that had held generations of Southern Africans in bondage and subhuman conditions.

This recognition is in spite of the fact that Nigeria does not share geographical borders with the subregion and was far removed from the direct consequences of apartheid.

The liberation of South Africa was rightly celebrated across the continent and the Black world as the final emancipation of Africans from colonialism and apartheid.

It is therefore, an unacceptable irony that a section of South Africans would so soon, after now, choose other Africans in their country as the targets of mindless violent attacks over frustrations for which the innocent victims have no control.

It would be recalled that I had on July 15, this year, met with the South African High Commissioner, Bobby Moroe, in Abuja over the same issue.

At the meeting, I had said: “The South African Government must as a matter of urgency do whatever it takes to protect the lives and property of Nigerians living there, just as the Nigerian Government remain committed to the safety of South Africans residing here and their investments.

“I believe we have faced enough, we will no longer take it anymore. The South African parliament must act fast to put a stop to this menace.”

I acknowledge the efforts the Federal Government is making to register the indignation of Nigerians on the cruel treatment of their compatriots in South Africa and to force an end to it.

As part of the efforts on Tuesday, the Minister of Foreign Affairs, Geoffrey Onyeama, summoned the South African High Commissioner to Nigeria.

President Muhammadu Buhari has also dispatched a special envoy to meet with the South African authorities, in addition to scheduling a presidential visit to South Africa for discussions with the government of that country on how to end the attacks and redress the current situation.

Every step necessary must be taken in protecting law-abiding foreigners, including Nigerians, and their businesses from hate crimes in South Africa.

It is noteworthy that South Africans and their businesses are prospering from the clement environment that Nigeria offers to all without discrimination. We demand no less from them.

The Senate is closely observing the situation and urges the Federal Government of Nigeria to accept nothing but the immediate cessation of hostility to Nigerians living in South Africa.

President of the Senate 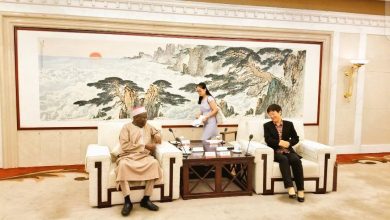 Presidency reacts to death of Channels TV Reporters, reveals next line of Action