Nnamdi Kanu, detained leader of the outlawed Indigenous People of Biafra (IPOB), on Thursday expressed his optimism that he will come out victorious in his pending cases at the Federal High Court, Abuja; United Nations (UN); International Criminal Court (ICC), and other law courts.

Later in the same month, Fein filed another petition against the Director-General (DG) of Nigeria’s Department of State Services (DSS), Yusuf Magaji Bichi, to the ICC.

It would be recalled that in June 2021, Kanu was arrested in Kenya and brought to Nigeria after he jumped bail and fled to the United Kingdom (UK) in 2017.

He has since been in the custody of the DSS. 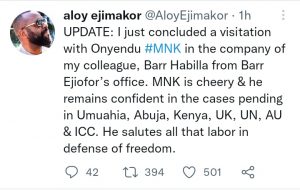 Providing an update on Kanu’s camp’s routine visit to the separatist leader at the DSS headquarters in Abuja, Barrister Aloy Ejimakor, wrote on his known Twitter handle: “I just concluded a visitation with Onyendu Mazi Nnamdi Kanu (MNK) in the company of my colleague, Barr Habilla from Barr Ejiofor’s office.

“MNK is cheery, and he remains confident in the cases pending in Umuahia, Abuja, Kenya, UK, UN, AU and ICC. He salutes all that labor in defense of freedom.”