Governor Samuel Ortom of Benue State on Tuesday morning expressed his sadness at the recent deadly attack on a rural community.

The herdsmen in large numbers rode on motorbikes, invaded the community, and murdered many innocent citizens.

The attackers ravaged the community and hundreds of people have been displaced.

Reacting to the dastardly attack, Ortom demanded that the assailants are arrested and made to face the wrath of the law. 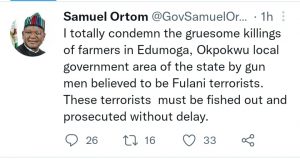 “I totally condemn the gruesome killings of farmers in Edumoga, Okpokwu local government area of the state by gun men believed to be Fulani terrorists. These terrorists must be fished out and prosecuted without delay,” Ortom wrote on his official Twitter handle.