Sowore who took to his verified Facebook page on Thursday to lampoon Nigerian authorities described the politicians and law enforcement agents as “hypocritical”. 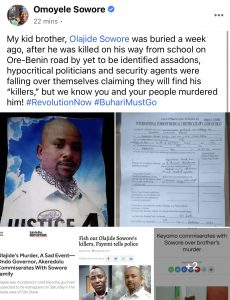 “My kid brother, Olajide Sowore was buried a week ago, after he was killed on his way from school on Ore-Benin road by yet to be identified assassins, hypocritical politicians and security agents were falling over themselves claiming they will find his “killers,” but we know you and your people murdered him! #RevolutionNow #BuhariMustGo,” Omoyele Sowore wrote.

Late Olajide Sowore has been buried in the Kiribo area of Ondo State.

His remains were laid to rest in the presence of his wife, four kids, family members, friends and associates.