Senator Shehu Sani, the legislator who represented Kaduna Central in the 8th Senate, says Nigerians are now used to negative stories and disasters.

According to the Peoples Democratic Party (PDP) member, “there was no tears and no crowd of mourners because the victims are not billionaires or politicians”. 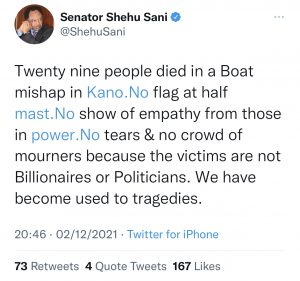 “Twenty nine people died in a Boat mishap in Kano. No flag at half mast. No show of empathy from those in power. No tears and no crowd of mourners because the victims are not Billionaires or Politicians. We have become used to tragedies,” Sani wrote on his verified Twitter handle on Thursday evening.

22 out of the 29 casualties were identified as indigenes of Badau village while seven others were travelers in the area, whose family members and relatives were yet to be identified.

Many of the dead persons have since been buried according to Islamic rites.

Six persons, including the driver of the boat narrowly escaped from the capsized boat.

The boat was said to be conveying the travelers from Badau village to Bagwai town in Tofa LGA, for the Maulid ceremony when it went under.

Governor Abdullahi Ganduje of Kano State has described the incident as a state tragedy.

Ganduje in a statement by his Chief Press Secretary, Abba Anwar blamed the incident on overloading.