Nearly two months ago, Iniubong Umoren, a job-seeker, was raped and killed in the outskirts of Uyo, Akwa-Ibom state.

Her suspected killer, Uduak Akpan, who lured her to location in guise of an interviewer, was nabbed after 24 hours but could not be arraigned because of the strike action embarked upon by Judiciary workers.

Akpan not only owned up to the crime, he also confessed to the rape of six other girls, using a reverse psychology tactic. The Akwa-Ibom state command of the Police, after parading the suspect before journalists at the police headquarters in Uyo, assured that he would be prosecuted immediately the judiciary staff called off their strike.

Now that the strike has been called off, POLITICS NIGERIA recalls some of the major highlights of the incident as police kick start the process of Akpan’s arraignment. Umoren, 26, had just finished her final year examination in the University of Uyo (UNIUYO) when the incident happened.

She was declared missing on April 30 after she left her house for a job interview in Oron, one of suburbs in Uyo.

Ms Umoren was raped and killed by her supposed interviewer, Akpan, who later buried her remains in a shallow grave in his father’s compound. The death of Ms Umoren, which is one of the many rape cases in the country sparked outrage both online and offline.

The hashtag #JusticeForHinyUmoren trended on the microblogging site – Twitter, for several days after the police in Akwa Ibom confirmed her death. Nevertheless, some concerned Nigerians have expressed doubt in the sincerity of the police to offer justice to the slain job-seeker.

A Socio-cultural Organization, Ati Annang Foundation has appointed Uwemedimo Nwoko, SAN, to watch brief on behalf of the Foundation in the murder case. The lawyer said he has engaged the services of a forensic expert to examine facts over the murder of Ms Umoren adding that he was optimistic that “justice” will be done in the case.

According to the letter of appointment from the Foundation, Mr Nwoko who is the immediate past Commissioner for Justice and Attorney General in Akwa Ibom State is to lead a team of ten other lawyers to monitor the activities from Akwa Ibom State Police Command on behalf of the Foundation.

“The Foundation requests full representation in all aspects and levels of the case, including the activities at the state police headquarters and other related police stations to when the charges are filed in the court and thereafter”, the Foundation said in a statement by its International President, Udo Kieran.

While the clamour for justice for the slain job seeker gains momentum, her elder sister, Ubong Umoren has secured a job in an Oil Company based in Port Harcourt.The Oil Company – Desicon Engineering Limited is owned by an Akwa Ibom billionaire businessman, Akan Udofia.

Meanwhile, People familiar with the tragic death of Ms Umoren described the gesture as an effort aimed at denying the late sister justice. Some other concerned Nigerians said offering a job to the elder sister of the deceased could force the family to lose interest in the case.

Ubong who was accompanied by the elder brother, Ukeme was at the company’s office for formal acceptance and documentation. Udofia, an Akwa Ibom businessman while paying a condolence visit to the Umoren’s family on May 8, had promised the sister of the victim, a job. 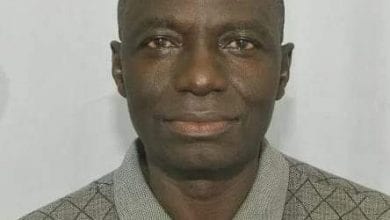 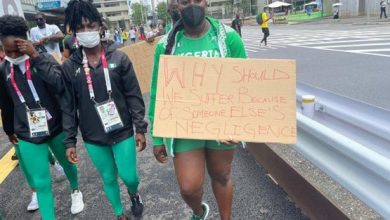 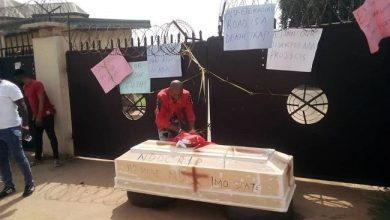