Multinational Joint Task Force (MNJTF) sector 1 Cameroon have conducted operation in Vretet-Zamga-Ngoshe triangle in the general area of Kirawa on the Nigeria/Cameroon borders where several Boko Haram/ISWAP insurgents were neutralised and many fled with gun shot wounds.

An intelligence analysis indicates that, the items were being smuggled from the borders to Sambisa forest.

Violence perpetrated by Boko Haram and ISWAP against civilian and military targets has resulted in mass atrocities in northern Nigeria.

See some photos from the operation below: 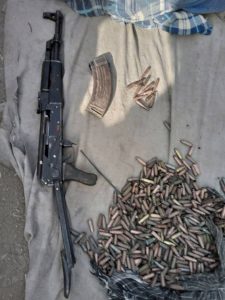