Kingsley Moghalu, the presidential candidate of the Young Progressives Party (YPP) in the 2019 Nigerian election, has expressed his sadness over the killing of Felix Jide Sowore, the immediate younger brother of activist, Omoyele Sowore.

Olajide was killed in the early hours of Saturday on his way from the Igbinedion University where he was studying Pharmacy.

Jide Sowore’s body has since been deposited at the Igbinedion University Teaching Hospital (IUTH). The police said about five persons travelling on the route were kidnapped during the incident. 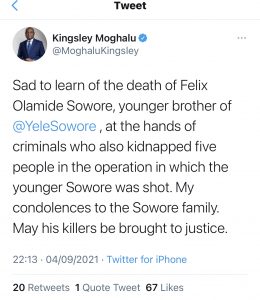 “Sad to learn of the death of Felix Olajide Sowore, younger brother of @YeleSowore , at the hands of criminals who also kidnapped five people in the operation in which the younger Sowore was shot. My condolences to the Sowore family. May his killers be brought to justice,” Moghalu wrote on his known Twitter handle on Saturday.