A former Youth Leader of the Peoples Democratic Party (PDP) has said the party “can never change”.

POLITICS NIGERIA reports that Adeyanju was reacting to the allegation of PDP aspirants in the 2023 general elections coughing up huge money to be announced as candidates.

The public commentator tackled PDP Chairman, Iyorchia Ayu, for allowing such “underhand” strategy under his watch. 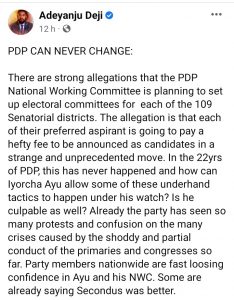 “There are strong allegations that the PDP National Working Committee (NWC) is planning to set up electoral committees for each of the 109 Senatorial districts. The allegation is that each of their preferred aspirant is going to pay a hefty fee to be announced as candidates in a strange and unprecedented move,” Adeyanju wrote on his verified Facebook page on Sunday night.

“In the 22yrs of PDP, this has never happened and how can Iyorcha Ayu allow some of these underhand tactics to happen under his watch? Is he culpable as well?

“Already the party has seen so many protests and confusion on the many crises caused by the shoddy and partial conduct of the primaries and congresses so far.

“Party members nationwide are fast loosing confidence in Ayu and his NWC. Some are already saying Uche Secondus was better.”