Both senators described the caretaker as ‘null’, ‘void’ and of no legal capacity to undertake actions on behalf of the party. The statement read;

“While congratulating His Excellency, the Governor of Ondo state on the majority judgement of the Supreme Court upholding His election by striking out the Petition, decisions affecting the legality and Status of CARETAKER AND EXTRA ORDINARY CONVENTION PLANNING COMMITTEE was along delivered.”

“It has long been in contention whether unelected officers of a political party can exercise the powers of party vested in the Chairman and officers of the Party who ought, by Party’s Constitution to be elected at duly convened convention of the Party at the National level and congresses at State and other levels.”

“A cursory reading of the Minority judgment ,we submit ,appears to have swept the carpet of legality off the CECPC rendering it illegal, null, void and of no legal capacity to undertake any action on behalf and in the name of the Party.”

“It has also brought to question the legality of ALL the actions taken by her since inception. Accordingly, in view of the impending Ward, Local Government, States and Zonal Congresses and indeed the National Convention (which the CECPC was primarily set up to do), it is our view:”

“That the Ward and other Congresses scheduled for July 31, 2021 be paused, suspended and put on hold pending the determination of the legal Status of the CECPC to undertake all the activities it so far has, and indeed jurisdiction to conduct the congresses and CONVENTION.”

“That the Party carefully and dispassionately Cause her team of legal experts to Review, appraise and give considered opinion on the import of the Majority and in extreme particular the reasonings in the Minority judgment of the Supreme Court as to the legal Status of the CECPC to proceed further with any activity in the name of the party or otherwise.”

“That options, including painful ones be recommended to PERFECT THE PARTY LEADERSHIP in the eyes of the Law with legal capacity to do what it ought to do.”

“That the Team also recommend measures to perfect matters in respect of pending elections and matters to rescue challenged pending processes.”

“That Time being of the essence, very limited timelines be set for each of the proposed steps. One cannot put something on nothing ànd expect it to stand.”

“FINALLY, this being a Supreme Court judgement ,we should be thankful that it has come very early that it will guide our Party to victory in 2023 as we mind carefully the legal Status of our systems, guiding us on avoidable actions as we approach the 2023 tape to brace successfully.”

“As stakeholders,we deem it appropriate to offer our voices adding to reasonable offers thus far made.” 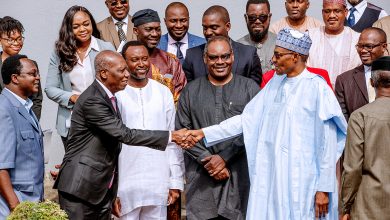