1. How Funtua helped me through my political journey – Buhari

President Muhammadu Buhari has narrated how his in-law and closet ally, Ismaila Isa Funtua, helped him through his political journey till he died on Monday. According to a statement on Tuesday by his Media Aide, Garba Shehu, President Buhari noted that the death of Funtua has created a big gap in his life and career.

The Nigerian Presidency has slammed Sahara Reporters founder, Omoyele Sowore over a statement on his meeting with the late Isa Funtua while he was in a DSS detention facility. Sowore, on Tuesday, disclosed that he ‘clashed’ with Funtua during a reconciliatory meeting which had Nduka Obaigbena, Vanguard Publisher, Sam Amuka and Garba Shehu.

Sahara Reporters Founder, Omoyele Sowore has replied the Nigerian presidency over a meeting he had with Late businessman, Isa Funtua, while he was in DSS detention.  Reacting to the Presidency’s statement issued by Shehu via Twitter, Sowore revealed that Presidential Muhammadu Buhari jailed his close ally and in-law in 1983.

The opposition Peoples Democratic Party, PDP, has said mocked the acting Managing Director of the Niger Delta Development Commission (NDDC), Kemebradikumo Pondei, for collapsing during a hearing to investigate the alleged mismanagement of N40 billion by the Interim Management Committee of NDDC. In a statement on Monday by Kola Ologbondiyan, PDP spokesman, the party said the NDDC boss slumped due to the heavyweight of corruption.

President Muhammadu Buhari on Tuesday met with his predecessor, Goodluck Jonathan at the Presidential Villa in Abuja to discuss the leadership tussle in the Republic of Mali. It was gathered that the former President arrived at Aso Rock at about 11am and both leaders went into a closed-door meeting. After the meeting, President Buhari promised to consult with key leaders of ECOWAS countries in order to find a solution to the crisis rocking the West African country.

The Speaker of the House of Representatives, Femi Gbajabiamila, has given the Minister of Niger Delta Affairs, Senator Godswill Akpabio, an ultimatum of 48 hours to publish details of members of the House who collected contracts from the Niger Delta Development Commission, NDDC. He issued the order in reaction to Akpabio’s allegation before an investigative panel on Monday that some lawmakers are beneficiaries of sleazy contract awards from the Commission.

Nigeria’s Minister of Aviation, Hadi Sirika has given an update on the resumption of International Flights in the country. Sirika, in a statement on Tuesday, disclosed that the widely rumoured October resumption date was false, clarifying that the international flights’ resumption maybe sooner.

Popular Chieftain of the All Progressives Congress, APC, Umar Gana is dead. Gana, a strong member of the party in Kaduna died recently after a brief illness. Reacting to the development, President Muhammadu Buhari, in a statement on Tuesday, mourned over the loss.

Members of the House of Representatives on the platform of the Peoples Democratic Party, PDP have threatened to commence impeach President Muhammadu Buhari over rising insecurity in the country. POLITICS NIGERIA gathered that the PDP lawmakers are set to commence impeachment proceedings against the president in four weeks. In a statement on Tuesday, July 21, the lawmakers warned they will commence impeachment proceedings against Buhari if the insecurity in the country is not immediately handled. 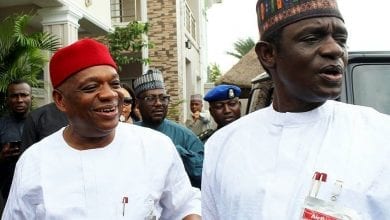