Adnan Abu Walid al-Sahrawi, the leader of Islamic State (ISIS) in the Greater Sahara, believed to be the mastermind of a 2017 attack in Niger Republic (Tongo Tongo ambush), has been killed, President Emmanuel Macron of France has said. 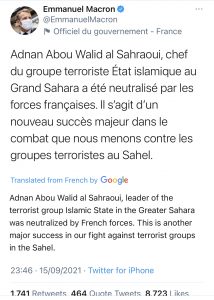 He did not disclose the location of the operation or when it took place, but described it as “another major success in our fight against terrorist groups in the Sahel” region of West Africa.

“Adnan Abou Walid al Sahraoui, leader of the terrorist group Islamic State in the Greater Sahara was neutralized by French forces. This is another major success in our fight against terrorist groups in the Sahel,” Macron wrote. The Islamic State leader, who is around 48 years of age, was born in the disputed territory of Western Sahara and became an Al-Qaeda ally. He switched allegiance to the Islamic State in 2015 and founded its Sahel affiliate.