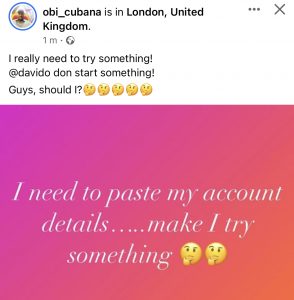 Writing on his known Facebook page on Wednesday evening, Cubana wrote: “I really need to try something!
@davido don start something!
Guys, should I?”

Davido has raised over N100m in less than six hours.

The superstar had jocularly requested for money from people who love him, and he was stunned by the responses.

He had dropped a Wema Bank account, which raked in N26 million within 31 minutes.

After four hours, the account had over N70 million in it.

The money keeps pouring in as of the time of publishing this report.

Cubana himself had sent Davido some money on the day.

The 28-year-old has three children, and is engaged to Chioma, the mother of his third child.