A former Minister of Aviation in Nigeria and top member of the ruling All Progressives Congress (APC), Femi Fani-Kayode on Tuesday questioned the Academic Staff Union of Universities (ASUU) for its perceived antagonism towards Isa Pantami, the Minister of Communications and Digital Economy.

POLITICS NIGERIA reports that ASUU on Monday said it is setting up a committee to probe the circumstances leading to the appointment of Pantami as a Professor of Cyber Security, by the Federal University of Technology Owerri (FUTO).

ASUU President, Professor Emmanuel Osodeke noted that the controversial appointment of Pantami by FUTO followed advertisements in some national dailies on September 2, 2020, which made Pantami purportedly apply for the position and thereafter given the position.

Expressing displeasure over the issues, the ASUU President noted that the Minister was only promoted to the rank of Lecturer 1 in 2013 before he left the country.

According to him, the Minister allegedly skipped three positions – Senior Lecturer, Associate Professor, and Professor – with each having at least three years experience requirements.

Professor Osodeke said that information at his disposal revealed that the Minister resigned from the Abubakar Tafewa Balewa University, Bauchi in 2015 and moved to a university in Saudi Arabia as an Assistant Professor, which is an equivalent of an Assistant Lecturer in Nigeria.

According to Osodeke, Pantami left the academic to become the Director-General of the National Information Technology Development Agency (NITDA) in 2016.

“There are serious doubt and unanswered questions bordering on the qualification of Dr. Isa Pantami for the position,” Prof. Osodeke had said.

But Fani-Kayode is having none of it. He claims he ‘knows Pantami well’ and advised people against judging him based on his religion. 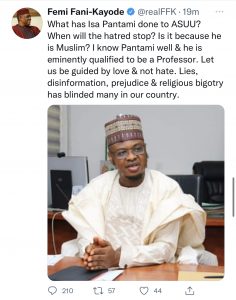 “What has Isa Pantami done to ASUU? When will the hatred stop? Is it because he is Muslim? I know Pantami well & he is eminently qualified to be a Professor. Let us be guided by love & not hate. Lies, disinformation, prejudice & religious bigotry has blinded many in our country,” Fani-Kayode wrote on his verified Twitter handle.