According to Yesufu via her verified Twitter handle on Saturday, former President Goodluck Jonathan, in 2015, was least of her choice as Nigeria leader. 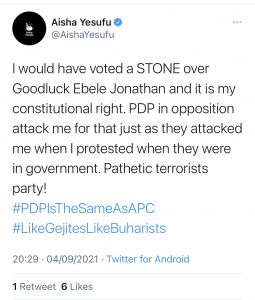 “I would have voted a STONE over Goodluck Ebele Jonathan and it is my constitutional right. PDP in opposition attack me for that just as they attacked me when I protested when they were in government. Pathetic terrorists party!
#PDPIsTheSameAsAPC #LikeGejitesLikeBuharists,” Yesufu wrote.

Yesufu is best known for co-convening the #BringBackOurGirls movement in 2014 and her involvement in the #EndSARS (anti-police brutality) protests which rocked the country last year. The mother of two has been outspoken against successive Nigerian governments, particularly the President Muhammadu Buhari-led administration.