The Spokesman of the Peoples Democratic Party (PDP) in Ebonyi State, Nwoba China Nwoba, on Wednesday said he is not a member of the outlawed Indigenous People of Biafra (IPOB).

POLITICS NIGERIA reports that the Department of State Services (DSS) in state invited Nwoba over his use of Biafra colours and insignia to design his wedding cake.

Nwoba and his wife, Onyinyechi, had surprised their guests at their wedding reception when they unveiled a cake designed with unmistakable Biafra colours. 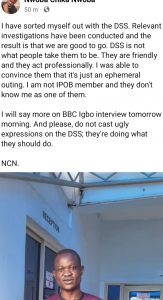 “I have sorted myself out with the DSS. Relevant investigations have been conducted and the result is that we are good to go. DSS is not what people take them to be. They are friendly and they act professionally. I was able to convince them that it’s just an ephemeral outing. I am not IPOB member and they don’t know me as one of them.

“I will say more on BBC Igbo interview tomorrow morning. And please, do not cast ugly expressions on the DSS; they’re doing what they should do,” Nwoba said via his official Facebook page.