Police in Imo State said they have arrested one of the suspected killers of Ahmed Gulak, a former aide to ex-President Goodluck Jonathan.

POLITICS NIGERIA recalls that Gulak, a chieftain of the ruling All Progressives Congress (APC), was murdered in May 2021 along Ngor Okpala Airport Road in Owerri.

Mike Abattam, the Public Relations Officer (PRO) of the Imo State Police Command, disclosed the capture of the suspects while briefing newsmen on Monday in Owerri. 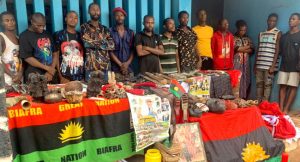 The deceased alongside one of his friends identified simply as Bernard, were in Owerri for a constitution review sitting.

At the conclusion of the sitting, they left their hotel and headed for Sam Mbakwe International cargo airport, to catch a flight to Abuja, unaware of the danger that loomed ahead.

At Obiangwu junction in Ngor okpala Local Government Area of Imo state, their vehicle was intercepted by some gunmen. Gulak was shot in the forehead and died on the spot.