The Indian Police have arrested an Indian-based actor of Nigerian descent, Chekwume Malvin, for allegedly engaging in hard drugs sale in the country.

Malvin, 45, was said to have been caught red-handed near the BDA Complex in HRBR Layout.

It was gathered that Malvin had been India on a medical visa, but later enrolled in the New York Film Academy in Mumbai to study acting.

After completing the course in Mumbai, Malvin joined the film industry and acted in over 20 Tamil, Malayalam and Kannada films.

Some of the more well-known films he had roles in include Vishwaroopam, Singham, Anna Bond, Dilwale and Paramathma. 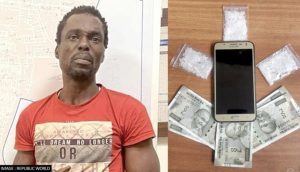 Upon his arrest, he allegedly confessed to the crime.