Hanan Buhari, a photographer and the youngest daughter of President Buhari landed in Bauchi on Thursday for the durbar organized just for her photographic pleasure by the Emir of Bauchi, Rilwanu Adamu, at his palace.

According to reports, Miss Buhari got the courtesy that would have been accorded her mother Aisha, as she was received at the Tafawa Balewa Airport by Bauchi’s First Lady and other government officials.

Many Nigerians on twitter have condemned Hanan’s use of the Nigerian Airforce aircraft for “personal use”.

There’s nothing in this life that’s ever going to justify or normalize Hanan Buhari’s use of the Presidential jet for private trip, not even the President is within the law allowed to useless the taxpayers money on personal or private purposes. But BMC boys would say it’s okay.

In a swift reaction, Garba Shehu, the Senior Special Assistant to the President on Media and Publicity, said wife and children of President Muhammadu Buhari, have the right to use the Presidential jet when they want.

The presidential aide also disclosed that Hanan sought and received approval from her father who in turn informed the National Security Adviser.

“It’s true that a member of the First Family was flown to Bauchi yesterday on a mission duly authorised.

“It wasn’t an impromptu or improper trip because it followed normal procedure. The Presidency informed the National Security Adviser of the mission who in turn informed the Commander of the Presidential Air Fleet.

“The normal practice in existence for a long time is that the Presidential Air fleet is available to the President and the first family and four others. These four are the Vice President, the Senate President the Speaker and any other person(s) authorised by the President,” Shehu said. 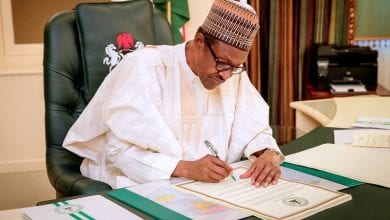