A self-styled disciple of Nnamdi Kanu, leader of the outlawed Indigenous People of Biafra (IPOB), on Tuesday asked Prof. Charles Soludo of Anambra State to ‘do whatever he is doing if any, for the release’ of the separatist leader.

POLITICS NIGERIA reports that Ekpa said this via his known Twitter handle, adding that the Anambra State Governor must immediately start a peace talk with his political opponents.

Numerous killings of innocent persons, kidnappings, and all forms of criminalities, including the brutal enforcement of the “sit at home” perpetuated by sundry groups claiming to be acting for or on behalf of IPOB, has thrown the southeast region into chaos. 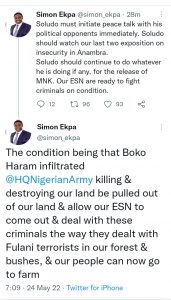 “Soludo must initiate peace talk with his political opponents immediately. Soludo should watch our last two exposition on insecurity in Anambra,” Ekpa said.

“Soludo should continue to do whatever he is doing if any, for the release of MNK. Our ESN are ready to fight criminals on condition.

“The condition being that Boko Haram infiltrated @HQNigerianArmy killing & destroying our land be pulled out of our land & allow our ESN to come out & deal with these criminals the way they dealt with Fulani terrorists in our forest & bushes, & our people can now go to farm.”