After days of speculations, the United States of America, widely considered the world’s most powerful country, layered out stringent travel restrictions to Nigerian citizens on 31, January 2020.

Aside from Nigeria, the Republic of Eritrea, Sudan, Tanzania, Kyrgyzstan and Myanmar are also added to the long list of banned countries which already holds Libya, Iran, Somalia, Syria, Yemen, Venezuela and North Korea. The last seven listed countries were the first to be on President Donald Trump black books back in 2017. Most of these countries have a majority Muslim population.

The trajectory of the Donald Trump-inspired travel ban

In January 2017, just days after coming into office, US President Donald Trump deemed it necessary to blacklist the citizens of seven majority-Muslim countries – Iran, Iraq, Syria, Yemen, Somalia, Sudan and Libya – from travelling to the US for 90 days.

Syrian refugees were banned indefinitely while refugee resettlement was stopped for a 120 days period. This version of the ban widely considered a Muslim-ban based on Trump’s campaign vow of ending Jihadist terrorism through halting “Muslim immigration” was later blocked by federal courts.

A second and revised version of the executive order appeared in March that same year. While the indefinite ban on Syrian refugees was lifted, Iraq was put off from the list after the Asian country agreed to boost relations with the US. The order was blocked like the one before it, but when appealed at the Supreme Court, the version of the policy was ordered to be served to travellers without close links to the US, howbeit, partially.

Yet again, Donald Trump led-government went ahead with a third version of the ban in September. Chad, North Korea and Venezuela were added to the upgraded list while the Sudan ban was lifted.

The fourth and most updated travel ban is the one proscribed on 31st January 2020.

What the countries stand to lose

Nationals of Nigeria, Eritrea, Kyrgyzstan, and Myanmar are henceforth denied residency visa to the United States. This denotes that Nigerians seeking to become citizens of the United States would need to reconsider the idea as the country no longer permits such. Citizens of the two other countries, Sudan and Tanzania will no longer be allowed to apply for Visa lotteries(diversity visas) which are meant for applicants from countries with low rates of immigration to the US.

What isn’t affected by the travel restriction

Visitors travelling as tourists or for holidays wouldn’t be affected by the ban when it fully comes into effect. Visas seeking visits to friends and relatives are still obtainable by citizens from the banned countries at the various US embassies.

Business personalities and people seeking medical treatment would not be affected by the policy. The US has it that about 8,000 immigration visas were issued to citizens of Nigeria in 2018. In the same period, 2,000 Sudanese citizens, 290 Tanzanians, and 31 Eritreans obtained visas from the US. The data outlines that the number of visas given Nigerians exceeds the numbers by the other countries added together.

Reason for the ban

The United States government says the decision to curb the travel of the Nationals from selected countries is due to failures by the countries to meet US security and information-sharing standards.

“These countries, for the most part, want to be helpful but for a variety of different reasons simply failed to meet those minimum requirements that we laid out,” an official told reporters.

President Muhammadu has said a committee to “study and address” the new visa requirements has been setup. This committee according to the Nigerian leader would be headed by one of his Ministers.

Mr Buhari added that concerted efforts have been effected towards fixing security lapses that led to the US curb on immigration from the country. The latest travel policy would take effect from 21 February. 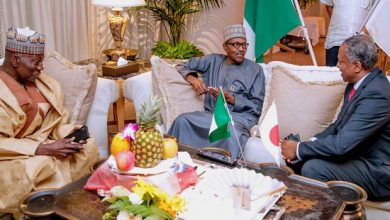