Microblogging site, Twitter on Thursday said it is pleased that President Muhammadu Buhari lifted a seven-month ban on it in the West African country, POLITICS NIGERIA reports.

The suspension of the San Francisco-based social network in Africa’s most populous nation came to an end today. Nigeria’s government blocked access to Twitter’s services on June 5, after the company deleted one of Buhari’s tweets for violating its rules. 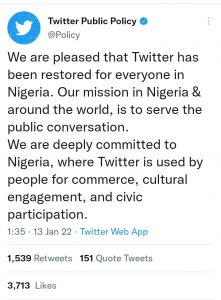 “We are pleased that Twitter has been restored for everyone in Nigeria. Our mission in Nigeria and around the world, is to serve the public conversation. We are deeply committed to Nigeria, where Twitter is used by people for commerce, cultural engagement, and civic participation,” Twitter’s update via its verified Public Policy page reads.

Government officials who had not been tweeting since last year are back tweeting.