POLITICS NIGERIA reports that some public affairs commentators opine that the dramatic surge in the activities of the criminals described as ‘unknown gunmen’ is a result of separatist agitation and associated repressive state responses, as well as the designation by the federal government of the Indigenous People of Biafra (IPOB) as a terrorist organisation.

Many lives have been lost and properties worth millions destroyed.

Commenting on the ugly situation, Yesufu warned people of the region against ‘romancing’ violence, adding that it will have a serious effect on southeasterners in the long run. 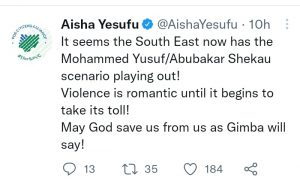 “It seems the South East now has the Mohammed Yusuf/Abubakar Shekau scenario playing out! Violence is romantic until it begins to take its toll! May God save us from us as Gimba will say!” Yesufu wrote on her verified Twitter handle on Friday night.