Senator Shehu Sani, who represented Kaduna Central in the 8th Senate on Monday subtly accused President Muhammadu Buhari and members of his cabinet of being obsessed with foreign doctors and international hospitals.

Sani who stated this via his verified Twitter handle, was reacting to last week’s foundation laying for a clinic for the president and other government officials.

POLITICS NIGERIA reports that following the persistent cries of inefficiency against the existing clinic at the Nigerian government state house in Abuja, the federal government last Monday laid the foundation for the construction of what it described as the presidential wing of the clinic.

President Buhari’s chief of staff, Ibrahim Gambari, performed the foundation laying ceremony at an event that was graced by dignitaries including government officials.

According to Gambari, the facility, when completed, will not only cater for the families of the President, his vice and their families but also visiting heads of states who may be in need of medical care. But Sani doubts Nigerian authorities. 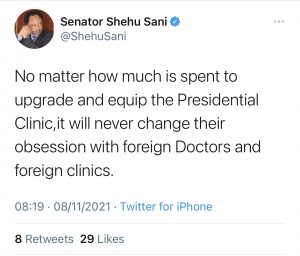 “No matter how much is spent to upgrade and equip the Presidential Clinic, it will never change their obsession with foreign Doctors and foreign clinics,” the Peoples Democratic Party (PDP) member wrote.

It is believed that over N20 billion is being pumped into the construction of the Presidential clinic.