Aloy Ejimakor, one of the lawyers of the outlawed Indigenous People of Biafra (IPOB), on Monday argued that the group he represents is not a terrorist organisation.

POLITICS NIGERIA reports that in 2017, the federal government of Nigeria declared IPOB as a terrorist organisation.

In recent times, the proscribed group, led by now-detained Nnamdi Kanu, has been accused of perpetrating violent attacks in the south-east region in order to achieve its secession agenda — but IPOB has repeatedly denied being behind the attacks.

Commenting on remarks in some quarters about IPOB being a terrorist organisation like bandits, Boko Haram and Islamic State’s West Africa Province (ISWAP), Ejimakor listed ‘facts’ which he said makes the pro-Biafra group a legal organisation. 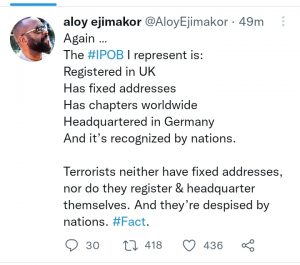 “Again…The #IPOB I represent is: Registered in UK, has fixed addresses, has chapters worldwide, headquartered in Germany, and it’s recognized by nations.

“Terrorists neither have fixed addresses, nor do they register & headquarter themselves. And they’re despised by nations. #Fact,” he wrote on his known Twitter handle.