Joe Igbokwe, a chieftain of the All Progressives Congress (APC) in Lagos State, has questioned the motive behind persons believed to be loyalists of the proscribed Indigenous People of Biafra (IPOB) attacking campaign events of the his party and the All Progressives Grand Alliance (APGA), while “leaving out” the Peoples Democratic Party (PDP).

Four persons were killed and several others injured as Anambra APC and APGA campaigns turned bloody on Sunday in Anambra State.

Although IPOB has denied declaring election boycott in Anambra State, its proponents have always called for cancellation of election in Anambra. This reporter also observed that IPOB activists often cheer news of destructions suffered by political party members and put fear in people to stay off campaign grounds.

Reacting, Igbokwe says something is fishy. 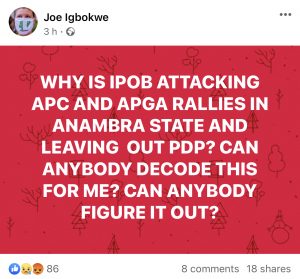 “WHY IS IPOB ATTACKING APC AND APGA RALLIES IN ANAMBRA STATE AND LEAVING OUT PDP? CAN ANYBODY DECODE THIS FOR ME? CAN ANYBODY FIGURE IT OUT?” Igbokwe wrote on his known Facebook page on Thursday.

The 2021 Anambra State gubernatorial election will take place on 6 November, to elect the Governor of the state. Incumbent APGA Governor Willie Obiano is term-limited and cannot seek re-election to a third consecutive term.