Joe Igbokwe, the Special Adviser for Drainage and Water Resources to Governor Babajide Sanwo- Olu of Lagos State, has said that the immediate past First Lady of Anambra State, Ebelechukwu Obiano, “got what she wanted” in her scuffle with Bianca Ojukwu, widow of the late Chukwuemeka Odumegwu-Ojukwu.

POLITICS NIGERIA reports that after Professor Charles Soludo was sworn in as the new governor of Anambra State on Thursday morning, Ebelechukwu walked to where Bianca was seated and immediately, both women engaged themselves in a fisticuff. The unfortunate spectacle drew the attention of security agents and some personalities who pulled Mrs Obiano off the hold of Bianca. 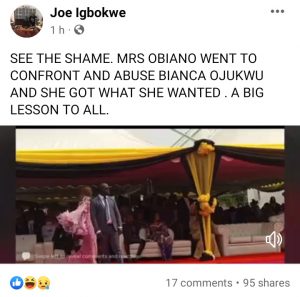 “See the shame. Mrs Obiano went to confront and abuse Bianca Ojukwu, and she got what she wanted. A big lesson to all,” Igbokwe, an indigene of Nnewi in Anambra State, wrote on his known Facebook page, with an accompanying video of the incident.

Meanwhile, Governor Soludo has apologised to all Anambra people, friends, and guests who attended his inauguration for the momentary breach of protocol that happened during his swearing-in ceremony.

In a statement obtained by this newspaper on Thursday afternoon, the Media Aide to Soludo, Joe Anatune, said the breach was caused by improper communication which arose from a personal issue between the two parties involved.

“Sadly, the fight took the shine off the main event of the day,” the statement reads in part.