Bruce Fein, the American counsel for the detained leader of the outlawed Indigenous People of Biafra (IPOB), Nnamdi Kanu, on Tuesday said the United Kingdom (UK) should ‘urgently’ visit the southeast region of Nigeria ‘to apologise, and make reparations for abandoning Igbo people to terrorists’.

POLITICS NIGERIA reports that the British colonized Nigeria in 1884. On October 1st, 1960, the African country was granted full independence by the European powerhouse.

Many Biafra agitators often criticise Britain for her role in the Nigerian Civil War of 1967 to 1970. They believe the UK ‘unfairly’ supported Nigeria in the battle.

In 2020, a notable Biafra separatist organization, the outlawed Indigenous People of Biafra (IPOB) accused the British government of masterminding discriminatory activities against Igbos.

Igbo people have complained of marginalization by the Nigerian federal government. Now, Fein is sending a message of discontent to the UK. 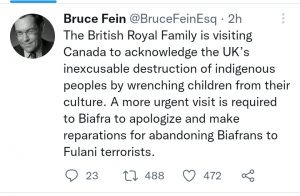 “The British Royal Family is visiting Canada to acknowledge the UK’s inexcusable destruction of indigenous peoples by wrenching children from their culture. A more urgent visit is required to Biafra to apologize and make reparations for abandoning Biafrans to Fulani terrorists,” he wrote on his known Twitter handle.