According to Momodu, who is presently a member of the Peoples Democratic Party (PDP), only the two leading political parties, the PDP and the All Progressives Congress (APC) provide a realistic platform for anybody serious about becoming Nigeria’s next president in 2023.

Some people are surprised and impressed at the level of work that went into my Presidential campaign in 2011. Lessons must be learned from that monumental experience:
1. We ran a youthful campaign led by a 26 year old Coordinator OHIMAI GODWIN AMAIZE but our political party platform was weak but I’m eternally grateful for the uncommon opportunity offered me by the National Conscience Party. You can’t win a National election from a small political party no matter your personal accomplishments and popularity… You need some humongous structures that can mainly be provided by the two leading political parties. A third force is a mirage for now.
2. The youths who complained the most about the geriatrics in power were not proactive enough about rescuing their country from incompetent leaders.
3. Campaign funding is the most critical factor in political campaigns globally. Until the people partake in campaign funding and become stakeholders in the electoral process, the super rich would continue to manipulate and hijack our collective destinies.
4. We must consistently demand for the personal accomplishments and records of our would-be leaders because no one can offer what he does not possess.
5. Women must show more than mere cursory interest in politics and help our country with their amazing talents and strength.
6. Our celebrities must use their stupendous popularity and influence to support worthy candidates like their counterparts in many other countries.
7. The media should do more in highlighting the SWOT analysis of candidate.
8. I’m suspecting that the unwieldy proliferation of political parties is a deliberate ploy to divide the younger candidates into ineffective platforms… 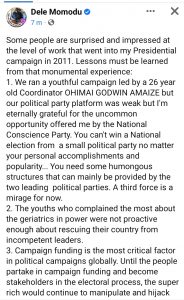