Jos-based law student and researcher, Atsen Oliver Azi, has said if Nollywood actor, Yul Edochie, did only traditional marriage to his first wife, ‘then he is not guilty of any offence’ under the Nigerian law.

POLITICS NIGERIA reports that according to Azi, Yul has a right, “but, if he got married under court’s registry then he can be sued for bigamy”.

Yul caused stir on Wednesday after he went public with his second marriage and announced fellow Nollywood actress, Judy Austin.

Edochie’s first wife of 17 years, May, also reacted to the news, as she called down the judgement of God on the latest couple.

Taking to the comment section of her husband’s announcement post, she wrote, “May God judge you both.”

Commenting on the trending news, Azi explained the position of the law. 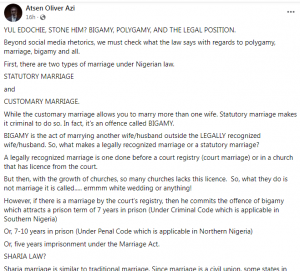 YUL EDOCHIE, STONE HIM? BIGAMY, POLYGAMY, AND THE LEGAL POSITION.

Beyond social media rhetorics, we must check what the law says with regards to polygamy, marriage, bigamy and all.

First, there are two types of marriage under Nigerian law.

While the traditional marriage allows you to marry more than one wife. Statutory marriage makes it criminal to do so. In fact, it’s an offence called BIGAMY.

BIGAMY is the act of marrying another wife/husband outside the LEGALLY recognized wife/husband. So, what makes a legally recognized marriage or a statutory marriage?

A legally recognized marriage is one done before a court registry (court marriage) or in a church that has licence from the court.

But then, with the growth of churches, so many churches lacks this licence.  So, what they do is not marriage it is called….. ermmm white wedding or anything!

However, if there is a marriage by the court’s registry, then he commits the offence of bigamy which attracts a prison term of 7 years in prison (Under Criminal Code which is applicable in Southern Nigeria)

Or, 7-10 years in prison (Under Penal Code which is applicable in Northern Nigeria)

Or, five years imprisonment under the Marriage Act.

Sharia marriage is similar to traditional marriage. Since marriage is a civil union, some states in Nigeria like Zamfara, Kano, Katsina and so on that have sharia laws in place, gives men the leverage to marry more wife. This is an Islamic principle. That is, if he can do justice to all of them then he can marry as much as four.

If Yul Edochie did only traditional marriage to his first wife, then he is not guilty. He has a right. But, if he got married under court’s registry then he can be sued for bigamy.