President Muhammadu Buhari on Tuesday afternoon in Abuja met with the Service Chiefs over the Kaduna train incident.

POLITICS NIGERIA reports that the Service Chiefs briefed President Buhari on last night’s attacks. Chief of Defence Staff, Chief of Army Staff and IG of Police all visited the scenes of the attacks earlier today.

While the casualty figure is yet to be confirmed, several persons are feared dead.

The incident happened around 7:45 pm on Monday at Dutse village in Chikun Local Government Area (LGA) just a few kilometres from the Rigasa train station, which is the last transit point of the train.

The bandits were said to have opened fire, shot sporadically on the train, and later gained access into the train.

It was the second train attack since October in Nigeria, which is battling armed rebels in the northern region and bandits who have kidnapped hundreds for ransom in the centre and north, leaving the population terrified. 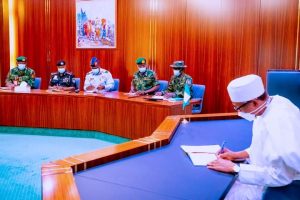 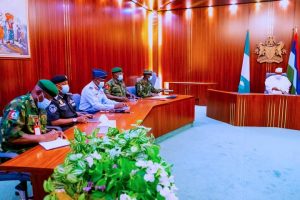 The Nigerian Railway Corporation (NRC) announced on Tuesday morning that it was suspending operations on the route – one of the most popular ones nationwide – until further notice.