President Muhammadu Buhari’s Chief of Staff, Abba Kyari is dead. In a statement on Saturday morning to POLITICS NIGERIA, the Presidency announced the passage of the Chief of Staff to the President, Mallam Abba Kyari. The deceased had tested positive to the ravaging COVID-19 and had been receiving treatment. Abba Kyari died on Friday, April 17, 2020.

POLITICS NIGERIA was reliably informed early Saturday morning that the President Chief of Staff, Abba Kyari has died. This newspaper gathered that the chief of staff who already had some health issues contracted the deadly coronavirus and was diagnosed positive on March 24th. He had been in self-isolation since. After his condition worsened he was reportedly flown to Lagos for further treatment. His health deteriorated badly before he eventually gave up the Ghost. This newspaper further gathered that Kyari died at First Cardiology Consultant (FCC), a top private cardiology-focused hospital located in Ikoyi, Lagos.

Senator Ali Ndume has attacked the Federal government’s relief committee on COVID-19 headed by the Minister of Humanitarian Affairs, Umar Sadiya Farouk, for being ‘Fraudulent’ in its dealings. Ndume, a fiery senator from Borno State, while addressing newsmen during a press conference in his Maiduguri home stated that the committee lacks the ‘credibility’ to manage the huge resources at its disposal.

The Nigerian Presidency has replied Senator Ali Ndume over recent comments that the Federal government’s relief committee on COVID-19 headed by the minister of Humanitarian affairs, Sadiya Umar Farouq was engaging in ‘fraud’. Ndume had accused the committee of being ‘fraudulent’ with the distribution of palliatives to Nigerians adding that the committee members were instead sharing them among private staff. In a statement sent to POLITICS NIGERIA, signed by the SSA to the president on media, Garba Shehu, the presidency admonished Ndume to mention names or ‘be quiet’.

Former Attorney General and Commissioner of Justice, Alhaji Aliyu Umar, SAN is dead. Umar Passed on Friday after a brief illness. Reacting to his death, Nigeria’s president, Muhammadu Buhari, commiserated with the friends and family of the deceased.

One of Nigeria’s revered senior lawyer, Femi Falana (SAN), has alleged that 21 Nigerians have been killed by trigger-happy security agents during the COVID-19 lockdown. Falana made the allegation in a letter dated April 16 and titled, Re: COVID-19 Killings By Security Forces, and addressed to the secretary, National Human Rights Commission (NHRC), Tony Ojukwu.

The Nigerian Government has spoken on the possibility of ending the lockdown currently put in place to curb the spread of Coronavirus. Speaking on Friday, the chairman of the Presidential Task Force (PTF) on COVID-19 and Secretary to the Government of the Federation (SGF), Boss Mustapha, urged Nigerians to work with the government on managing the pandemic.

Governor Nyesom Wike of Rivers State has ordered the arrest of 22 workers of Exxon Mobil for violating the lockdown order in the state to curb the spread of the Coronavirus. POLITICS NIGERIA reports that this is coming a week after the governor ordered the arrest of two Caverton Helicopters’ pilots and passengers for flouting the lockdown order in the state. During a media briefing on Friday in Port Harcourt, the state capital, Wike said the state government arrested the oil workers for entering the state from Akwa Ibom.

The Inspector-General of Police, Mohammed Adamu, has ordered the immediate redeployment of Rivers State Commissioner of Police, Dandaura Mustapha. Force Public Relations Officer, Frank Mba, disclosed this in a statement sent to POLITICS NIGERIA. According to the statement, Mustapha is replaced by Joseph Gobum Mukari, adding that the redeployment takes immediate effect.

An office of the Independent National Electoral Commission, INEC was engulfed in flames on Friday morning, POLITICS NIGERIA has gathered. It was gathered that the fire outbreak occurred in the Media Centre of the commission. Confirming the incident, INEC National Commissioner and Chairman of its Information and Voter Education Committee, Festus Okoye, said only some furniture and equipment were destroyed in the inferno, adding that the incident will not affect the operations of the commission. 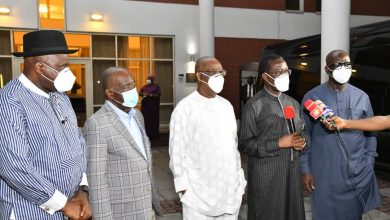 Presidency: Real Reason Why APC will Rule Nigeria Beyond 2023 – Oshiomhole