Following the condemnation by the Aareonakakanfo of Yorubaland, Gani Adams and other Yoruba leaders of Sheikh Ahmad Gumi’s visitation to Igboho town last weekend, former Kaduna senator, Shehu Sani, has made a humorous offer. 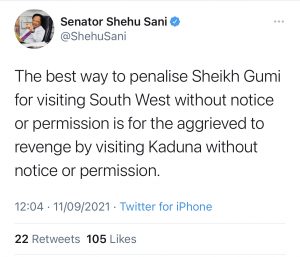 They dismissed Sheikh Gumi’s visit to Igboho town, saying the visit was an “attempt to mock and undermine the efforts of the Yoruba activists and freedom fighters”.

They also claimed that the Islamic cleric’s body language, utterances in Igboho town “truly showed that he was behind the DSS attack on Igboho’s Soka home, and that part of the Yoruba territories have been conquered”.

“Gumi is a Nigerian, he has a right to visit any part of the country but it shouldn’t be to the extent of being deliberately attacking Igboho’s ideology in his hometown.

“Such an attempt is provocative and can lead to a crisis. That was why it elicited various reactions. Gumi’s ideas are always at variance with the present reality in the country and I think it is better for him to desist from fanning the embers of discord in the country and the southwest in particular,” part of the SSSG’s statement added.