Dino Melaye, the Spokesperson of the Peoples Democratic Party (PDP) Presidential Campaign Management Committee, on Monday said that Bola Tinubu, presidential candidate of the All Progressives Congress (APC) for the 2023 election, rode a fitness bike because he is suffering from parkinson’s disease.

POLITICS NIGERIA had reported how Tinubu shared a video of him bicycling to prove he is healthy.

The video comes amid concerns over his whereabouts, following his absence at the signing of the peace accord for the 2023 elections.

Concerns over the former Lagos State governor’s absence at public events in recent days were also raised after the inauguration of the APC presidential campaign council, which was earlier scheduled to hold on September 28, was postponed. Some people even said that he is dead.

Against the backdrop of the rumours, Tinubu declared that he is hale, healthy and ‘ready to serve Nigeria from day one’.

But reacting to the clip via his known Twitter handle, Melaye suggested that the 70-year-old is suffering from parkinson’s disease. 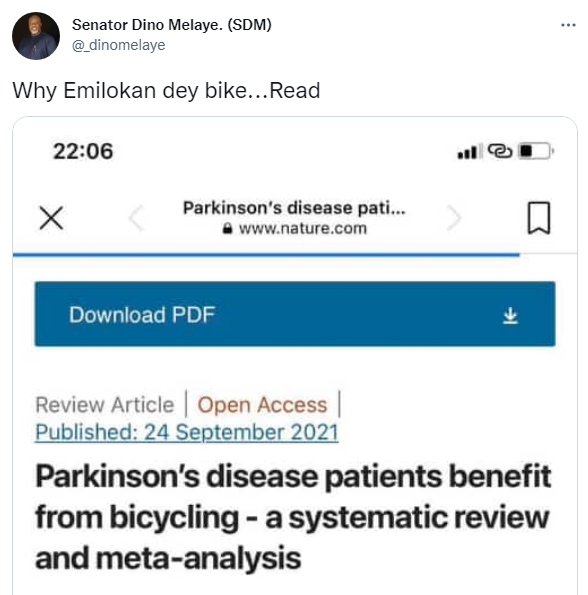 He wrote: “Why Emilokan (referring to Tinubu) dey bike…Read,” with a screenshot of a commentary about parkinson’s disease patients.